HISTORY AND IDENTITY, the IDENTIFICATION process

The New MNIR in the Palace of the Post, originally built to be a place of transit for correspondence of personal stories and relationships. Here, letters went back and forth, telling of tragedies and love, business and dreams that have always distinguished the history of humankind. In addition to these, artifacts, treaties and findings make up the identity of the country and its people. A history, a story, with many interpretations. The mirror of history reflects a clear image of modern society and of the tools to design its future. We identify ourselves in our image reflected in the mirror, and in the mirror of history we find our shared identity. The extensive mirrored roof over the courtyard is the thread that joins the city’s everyday life and the public square, the heart of the National Museum of Romanian History, in an attractive reciprocal relationship. The mirror will be the identifying signal of the presence of the MNIR in the centre of Bucharest.

The role of the courtyard, which will be liberated with the demolition of the bulky central pavilion, added in the 1970s, remains conditioned by the presence of parts of the replica of Trajan’s Column, of major architectural value, six by six metres at the base and almost eight metres high, surrounded by more than 100 fragments that recount a two thousand year old history. A cinematographic story. The first, major, colossal MOVIE, projected on 200 metres of “film” sculpted around its trunk. A surprising preview of the narrative language of cinematographic construction. False floors, interruptions, times and places that intertwine. The coexistence of several narratives that from different points of view represent the same story. Two thousand years ago in Rome, the Column was not visible at the centre of the small colonnaded courtyard, located at the end of the Forum, after the Basilica. It was not visible until one actually entered the courtyard itself. In that very moment, it appeared hugely disproportionate among the other columns, and looking upwards, its 39 metres made a dramatic impression. The choice to re-contextualize this document, inserting it into the portion of the building to be redesigned, targets diverse purposes:
– the courtyard becomes an authentic free and usable public space;
– the three, beautiful nineteenth-century facades that overlook it, Stavropoleos, Postei and Franceza, enhanced by accurate scientific restoration, and freed of any visual impediments, become perfectly enjoyable, as was the original intention of the designer.
– The facade of the Calea Victoriei side, restored according to the initial project by ….. with a philological interposition, becomes a frame and a complementary hinge of the system of pathways connected with the exposition of the Column and the other collections;
– At the entrance to the foyer, coming from Calea Victoriei, and in the courtyard, entering from Strada Postei, the visitor immediately encounters a “revisited” base of the column that recalls the original location in Rome, a sort of overlap of the two places.

Immediate contact with the beginning of the history, that is the origin of modern-day Romania.
The MNIR, or Column Square
A complex, yet simple urban space.
The two access points, from “above”, arriving from the foyer, from “below, entering from Strada Postei, merge in a relationship harmonized by the staggering of the levels.
Below, the functional spaces and the coming and going of people, passing from one place to another.
Auditorium, library, restaurant, thematic collections.
Above, the actual square where people meet, sit and rest, attend events and watch performances, where children play. An immensely versatile space.
Between the two, stairways where one can sit, recalling the entrance on Calea Victoriei.
All around is the museum, with the column from where the museum itinerary begins.

Pathways
The position of the column with its “portico” at the centre of the foyer, forces a change in direction of the flow of movement and penetration inside the building.
This accentuates the restoration of the path parallel to Calea Victoriei, which characterized the original layout of the building.
This axis is repeated on all the floors, becoming the reference axis, and makes orientation easy for visitors when moving from one collection to another.

Indeed, we propose to maintain the vertical distribution system via the two existing stairways, highlighting its presence with the restoration of the original openings, and the creation of new openings. These two stairways give total flexibility to visiting the collections, as they are located exactly in the points of passage between one and the other. 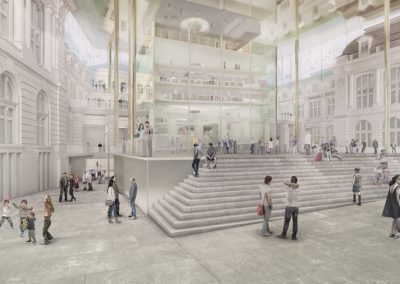 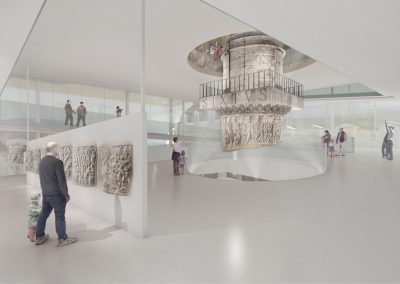 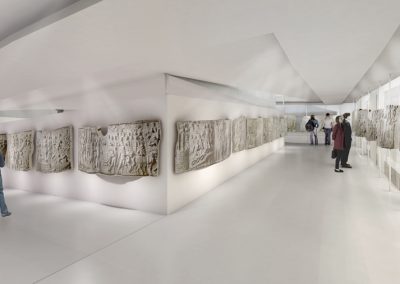 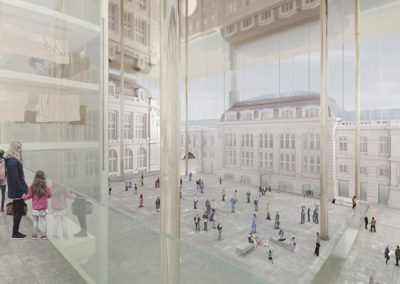